We’ve made a number of improvements to the iCal section of the system. The biggest change is that we are now able to automatically cancel reservations and handle modifications (with some limitations, see below). We have also added a one-click way to run the import of all iCal links in your account.

To enable automatic cancellation of reservations that no longer appear in your iCal feed, go to the iCal section (link below the availability calendar, and click Edit next to an existing link (or add a new link). And then select a status to be used. Most people will want to use their “Cancelled” status, which will make the old reservation no longer block the calendar. 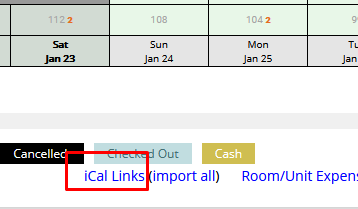 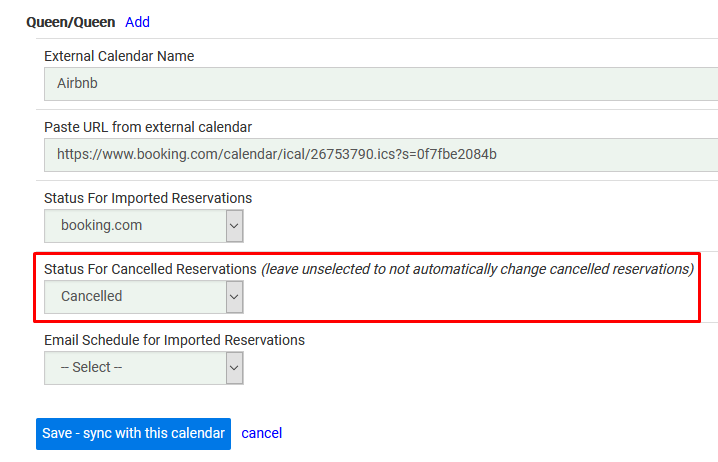 NOTE: this will only work with reservations added after making this setting.

Since matching is based on start/end dates in our database matching exactly with those in the import file, this means modifications will also get cancelled (since the start/end dates no longer appear the same in the import file, and therefore we can’t tell that the reservation is already in our system – again, this would have worked much more cleanly if all reservations were assigned unique ID numbers in iCal files, but that is just one of the limitations of iCal that we have to live with). So, how this works is we cancel the old reservation, and then re-run the import file, which catches any modifications and adds them fresh. The only drawback to this, is that if a cancelled reservation had previously been edited, the new reservation doesn’t have any of those edits (price changes, emails, notes, etc.). But in cases where this happens, it will be easy enough to search by guest name and find the old cancelled reservation (which is why we are not deleting any reservations with this procedure).

Finally, we have added a new way to quickly import all iCal links with one click. Rather than waiting for our system to automatically pull the files (which we currently do every 4 hours). You can find this in two places – at the top of the iCal modal window as a button, and also at the bottom of the availability calendar as a link. 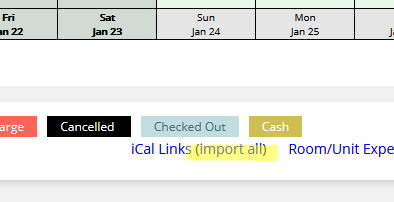 We have done a lot of testing with this, but as always, it is almost impossible to anticipate every situation which might arise, so please monitor your cancellations/modifications and confirm the proper changes are being made by the system. And of course, we look forward to feedback and further suggestions about these features.

This website uses cookies to improve your experience while you navigate through the website. Out of these cookies, the cookies that are categorized as necessary are stored on your browser as they are as essential for the working of basic functionalities of the website. We also use third-party cookies that help us analyze and understand how you use this website. These cookies will be stored in your browser only with your consent. You also have the option to opt-out of these cookies. But opting out of some of these cookies may have an effect on your browsing experience.
Necessary Always Enabled
Necessary cookies are absolutely essential for the website to function properly. This category only includes cookies that ensures basic functionalities and security features of the website. These cookies do not store any personal information.
Non-necessary
Any cookies that may not be particularly necessary for the website to function and is used specifically to collect user personal data via analytics, ads, other embedded contents are termed as non-necessary cookies. It is mandatory to procure user consent prior to running these cookies on your website.
SAVE & ACCEPT